Tracking Progress on the 2030 ‘Great Reset’

There’s a strong argument that we would sell more ‘better bedtime stories’ if we stopped using this column to machine-gun the World Economic Forum’s (WEF) coordinated advance to use the pandemic to push forward a future of fascism where you own nothing, and like it.

This gig was never about the money.

This column is for elevating consciousness on liberty, sound money, and teaching kids to question authority. There’s no such thing as a good-little-slave.

What we need desperately is a generation of children better prepared to lead. Frankly, we’ll get one, even if we fail as parents.

Nothing molds young people stronger than hard times. For the ‘greatest generation’, their childhood was mired by the Great Depression — breadlines, brankruptcies, homeless Hoovervilles, and destitution. They reached adulthood just in time to storm the beaches of Normandy. 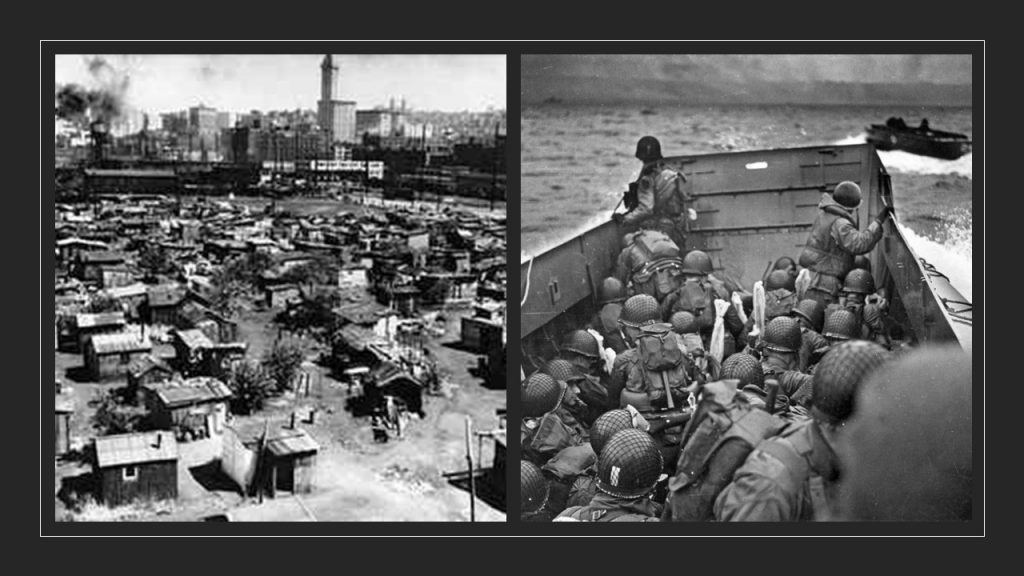 So, here we go, once more unto the breach, dear friends, once more.

The WEF’s Eight Predictions for 2030

They gave us a taste of what was to come with this eerie video in 2016, so drunk on hubris they expected us to like and share it. With five years gone by, let’s examine their predictions-

1) This is one says it all: You’ll own nothing, and like it-

Anything you might want (from their inventories), they’ll rent it back to you if you’re lucky, you filthy gnats…

So, a future without property rights (but yay, drones). That can only happen through totalitarianism, for the collective good. How are they doing?

Well, BlackRock CEO Larry Fink is both on the WEF Board of Trustees, and also now aggressively using the Fed’s zero-interest-rate policy for a leveraged buyout of the American middleclass, soaking up whole neighborhoods and pricing families out of real estate, then renting those homes back to them.

Which businesses are nonessential? The ones you and I own, i.e., small mom-and-pop shops and community-based businesses that keep us from relying completely on the oligarchs.

They’re closer to this than anyone in 2016 could have possibly dreamed, with eight years to go. Hell, at this rate they may be early.

As far as being happy about it, maybe they’ll mandate mood-enhancing mRNA boosters.

2) The USA will lose power and influence-

Just look at the Afghanistan debacle – a clear signal to the world – not to mention the literal destruction of the dollar with deficit spending beyond our wildest of 2016 imaginations.

I never voted for Trump, Sanders, or Biden, but think about it: Only one would go along with the WEF agenda, and heading into the primaries, he was dead in the water.

Voters wanted Sanders vs Trump, then magic happened, and the powerbase lined up behind a man in the throes of dementia who can’t stay awake during meetings.

If you’re not convinced, just check the Biden administration’s website URL, which matches the WEF slogan exactly: BuildBackBetter.org. If it walks like a duck… 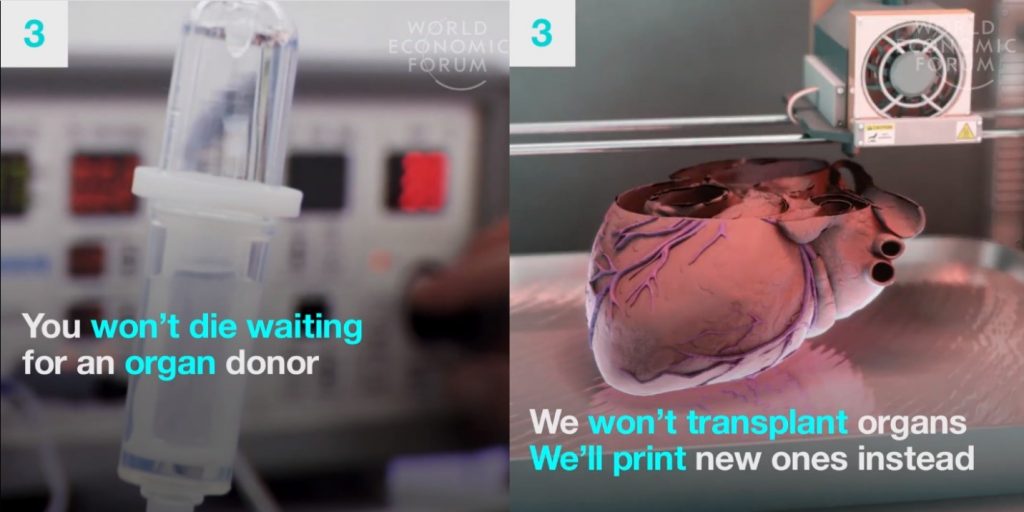 This is technobabble, capturing your imagination to make them sound altruistic. They’re not. While they fully intend to manufacture human organs, you better hope you don’t need one.

You won’t own anything, including your organs, or any printed ones. They own everything, got it plebe?

4) Resources are getting rationed, so get used to it-

Somebody tell these dipshits that natural, free-range, grass-fed meat is as healthy as it gets.

Although, they know this. They just think we’re too stupid to figure it out. The goal is to eliminate beef for the little people to combat climate change. So, are they closer to telling us what we can and cannot eat?

Well, they tell us where we can eat, when to wear masks, and if we can even leave our house…

So, yeah, I guess they’re close.

Get ready for cricket-burgers (for your own good, of course).

5) The flooding of Western democracies with immigrants will continue- 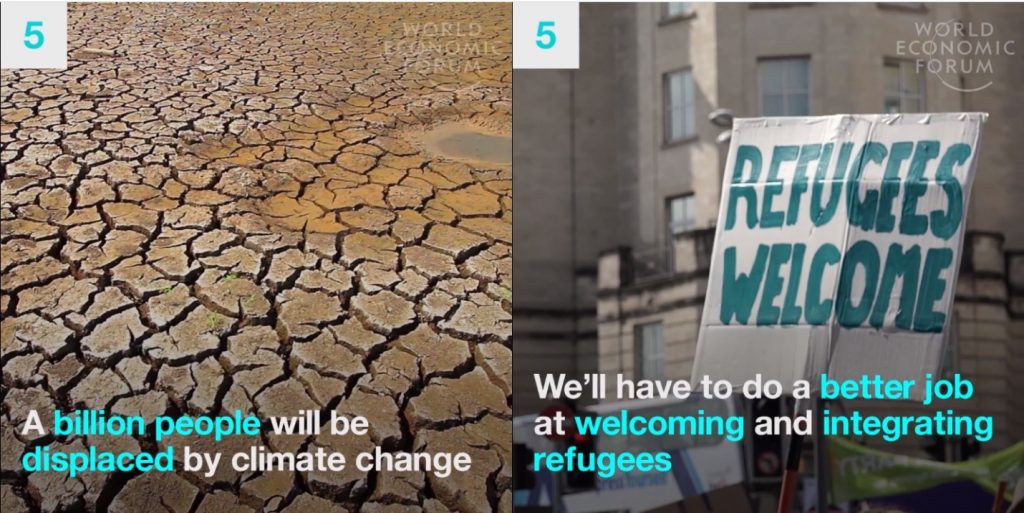 It began with a refugee crisis into Europe in 2015 (from the Middle East and North Africa), now they’re pouring into the USA from Central and South America, Mexico and Afghanistan.

Whatever your thoughts on immigration, it’s happening en masse, though not due to climate change. It’s their forever wars and political instability driving it.

What seems clear is that the string-pullers want it; it divides the country and dilutes any shared culture or values. It’s a textbook divide-and-conquer strategy.

6) The Carbon racket is here- 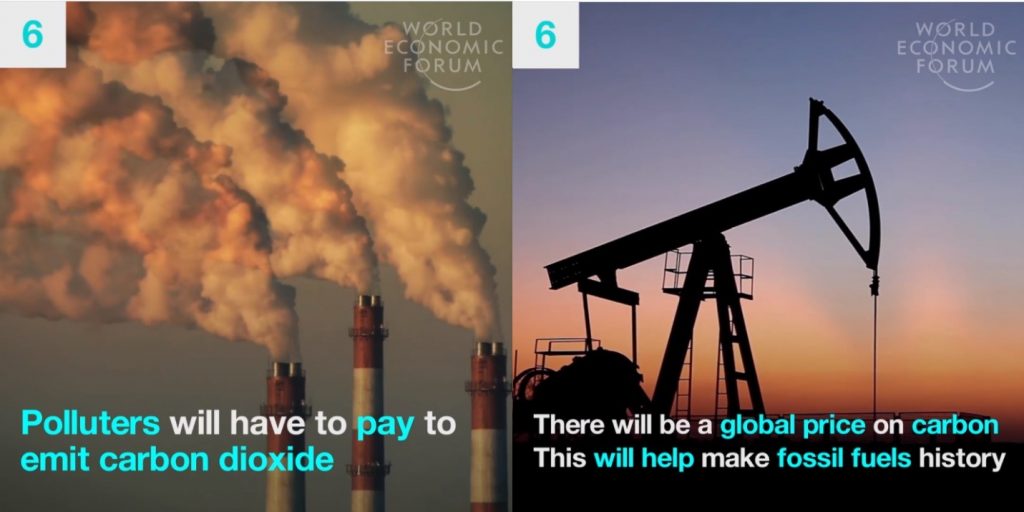 Look, the world runs on fossil fuels, mostly oil. Get used to it.

Even the nutrients in food are no longer coming from rich, life-breeding soil, largely now depleted, replaced with fossil-fuel-fertilizers. Even those nutrients then get flushed down the toilet.

If you are a consumer in the global economy, you are a polluter, and you will pay more taxes to afford phony, worthless carbon credits and offsets that are purely a racket, siphoning more resources from the productive economy to the bureaucratic apparatus at the top trying to control us.

If we want to get off fossil fuels quickly, we’ll need to cull the herd. I can’t help but think that’s what they have planned.

More technobabble to get you excited for a future where you own nothing, eat mealworms, and like it. Because, hey, you’re going to Mars (maybe). Well, you could be, in theory.

But you’re not. Not really. No one is sending you to Mars, plebe.

Space travel is for the WEF and the oligarchs at the top of the pyramid. Mark Zuckerberg and Bill Gates are going first, two space nerds to represent humanity on the red planet.

You’ll be here on Earth, on your hands and knees scrubbing the floors (assuming you’re not part of the 75% that gets culled).

Then again, that’s a 3:1 shot, so better assume you’re getting culled.

8) The final prediction? An end to individual liberty- 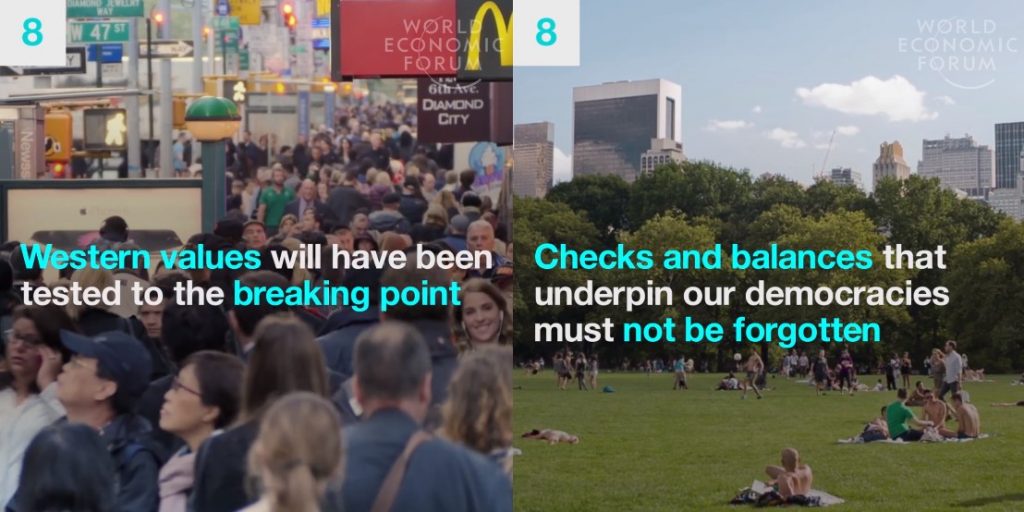 I’d say Western values are indeed being tested, and not holding up well. Australia is now a prison state building concentration camps. If these bureaucratic sociopaths have their way, the USA is next.

It’s a mass psychosis, perfected by the Nazi’s and passed down carefully through the halls of power, all in the name of totalitarian control. For the collective good, of course.

Don’t fall for their tricks using the psychology of fear to get us fighting with each other.

And teach your kids to #QuestionAuthority.

Want to raise empowered, resilient kids who can see behind the curtain, who know how the money system works, and how to use it? Kids who understand debt, the business cycle, and the risk in groupthink?

Not sure? Try our free starter guide below-

Want more like this? Try The Great Reset for Dummies.