As we ring in another New Year, I’m turning the page on my 30’s and officially joining the ranks of the middle-aged, with the big 4-0.

Sharing a January 8th birthday with Elvis, it’s time to start managing my decline. I’m hoping to follow in the King’s footsteps sporting a bulging leather body suit with a steady supply of barbiturates at the Las Vegas Hilton, replaying my old hits for drunk tourists in a smoky cocktail lounge, two years from dying on a Memphis toilet.

When I look at others my age (lost in my own fantasy) they just seem older. Does everyone feel 5-7 years younger on the inside? I still got it… right honey?

Despite having my circuits clearly crossed, I must come to terms with reality. It’s strange to leave behind a big part of your identity, like no longer being “charming”, “witty”, “great with kids”, or any other adjective you hold dear. And if I’m not “young” anymore, that means I’m old. “Middle-aged” is a soft, limp, flaccid, (shriveled) consolation.

With youth came vigor, health and wellness, and a now-fading naivety around them. I used to think (or often say, chest puffed out), my shit works (nodding, basking), like I won the Powerball of gene lotteries, but some of it just doesn’t anymore. There is no arguing with fading vision, a slowed metabolism, or the extra time required to heal from sprains, strains, bruises and hangovers (ever had one last ‘til Wednesday)?

Still worse is the flesh ballooning in under the jaw-line, not unlike Ursula from Little Mermaid. Fifteen years ago (Marlboro hanging from the side of my mouth, hand on the stick-shift of my old Datsun 280ZX), I wouldn’t have known or cared who the damn witch was. Now, I have (a) read the book, (b) seen the movie, (c) ridden the ride a hundred times at Disney, and (d) many of my friends are starting to look like her (minus the hair). 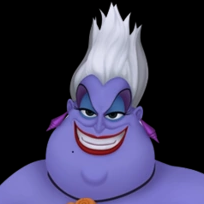 As men my age know well, the “jerk-wad” (as Ashley calls it) competes hardily with the potbelly and pattern baldness for father time’s biggest tell on aging superstars of yesteryear. For those lucky enough to skate all three, the Clooney’s and Pitt’s of the world, the cover of GQ awaits.

We do have it easier, permitted to go gently and quietly into that good night while the scars of 40 bare down on the fairer sex like an on-coming train.

1)  At the midpoint on the wondering road of life, I can’t help but suddenly feel like I’ve wasted too much. All those nights and weekends partying in my 20s… for six years straight, my fridge was merely a holding pen for a rotating sequence of Budweiser 30-packs. No dairy, no protein, not even a lone jar of pickles or bottle of Heinz. By Monday morning, there wasn’t an inch of counter space not zoned for empties.

Good times were had by all, and memories made, but what was I thinking?

I only wish I had half the time back to spend reading, writing, thinking BIG, and figuring out the world. But it was fun, a nice decade to spend in San Diego, sailing the coast in a cheap ’78 Catalina 27′. She turns 40 this year too, in the arms of another man. 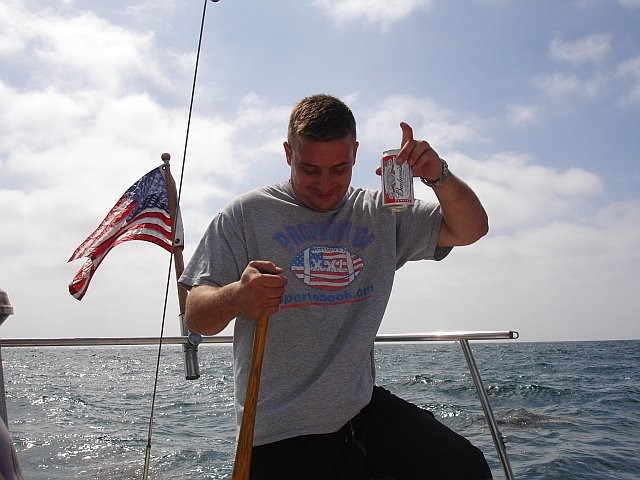 2)  I still waste a godawful amount of precious, dwindling time, and not on a sailboat (maybe I had it right before). Days, weeks, months are swallowed by minutia at home or the office because I’m used to doing things one way and haven’t focused more on automation, innovation, or delegation. How can I expect to scale, think strategically, or accomplish great things when I am building mostly with the little Legos?

3)  When I’m home, I’m often not present. I’m working, or thinking about work. What a tragic disservice that is to myself and my family.

4)  I get annoyed by my kids, knowing I will pine over these years when they’re over. Why torture ourselves, complaining our way through it only to miss it when it’s gone?

Two come to mind, my job (this is my 18th year with the business, and our most significant), and my family. I’ve devoted more time to the former, which should change, but probably won’t (until the kids are no longer kids, with better things to do than throw footballs and frisbees or build rockets, dollhouses, and treehouses with dad). This momentous year also marks our 10th of marriage, Ashley and I.

The lesson is stark: only from real work comes true reward.

There are no substitutes in life for persistence and passion; no short-cuts to a happy marriage or successful career. Nothing good comes too easily or without sacrifice.

Remember that, each time the will to quit teases by with her soft eyes and easy smile. With the big 4-0 comes life experience, a wisdom that can’t be learned in a textbook, taught in a lecture, scribbled on a bathroom wall, or bottled in a Budweiser.

Turns out, changes in style from being a teenager in the late 90’s to middle-aged today afford some room to grow into one’s pants. 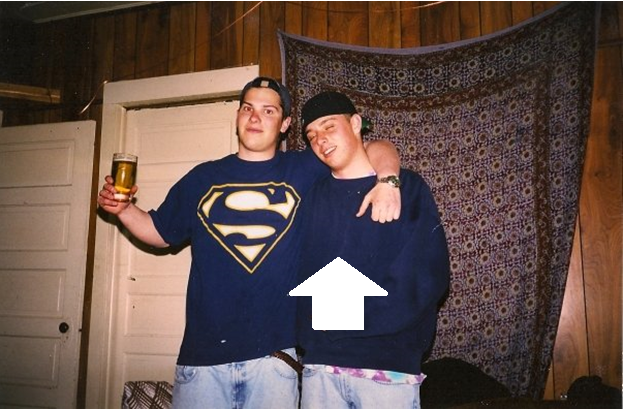 The thrills we had, romping around Boulder in a Jeep without doors, Peter Tosh echoing off the flatirons. The freedom of youth tastes sweet, before the weight of the world descends with the arrival of spouses and babies, but mostly in retrospect. We knew not what we had, without a worry and little frame of reference. 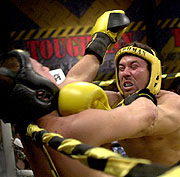 sports- Phil Denniston (cq.left) of CC and Joseph Gallimore (cq) of Orange Grove battle it out during the first round of the second fight at the Toughman Competition Friday night at Memorial Coliseum. Gallimore won the fight. (photo by michelle christenson 7/13/01)

Thirty pounds sounds like a huge jump, but it’s just 14 over my fighting weight in 2001, pasted against the ropes by that beast to your right-

I got pummeled that night, but landed my share of blows, and never went down. Look at the steely-eyed growl on that little bulldog…almost reminds me of Clubber Lang.

The beatdown I got was also not dissimilar. I lost a unanimous decision, but unlike Clubber, my opponent refused to fight-on (his ear drums filled with blood by morning from my own youthful scrappiness).

Ah, the glory days. Like Rocky, I was all muscle, and keep insisting that’s still the case. Does anyone else suck in their stomach even alone in the bathroom mirror?

We’ve done well enough, and I cannot complain, but it’s true what they say, that well enough is never quite enough. Does that make me vain?

It’s amazing how expenses track income in lockstep, like Newton’s 3rd Law. How did we manage to find and fall in love with coffees twice the cost of Starbucks? Even salt, the cheapest thing at the grocery store, and we are flying it in from the Himalayas, relative costs be damned (in the name of quality and nutrition, so insists my wife).

Ah, the weight and responsibilities of attachment. Amazon may be taking over the world, but thank goodness they bought Whole Foods and brought some damn relief. The cost-of-living is otherwise going up, and I have no interest in just “scraping by”.

What I want for my growing family is not just a nice house with a pool, fast car, and vacations to the beach and mountains (which I also want), but real security.

That means being self-reliant without a big drop in living standards even if disaster strikes, like disability from a car wreck. I’d like to be able to pick up at a moment’s notice and move us out of the country in the case of war with Russia or China, or a dollar collapse after a loss of confidence from all the money-printing.

Shit really does happen (read your history), and mostly to the ill-prepared.

As primates we are not good at anticipating trouble on a massive scale, with a normalcy bias and propensity for shifting baselines (like frogs, slowly coming to a boil).

Plus, we’ve outsourced all the worrying to Washington, no? They’ll take care of global stuff, and we can just focus on local, right? Famous last words.

Sure, I’m looking forward to the NFL playoffs and don’t begrudge anyone for caring about The Bachelor, but I’d also like to be able to take care of my family no matter the scenario, and with all the creature comforts. You don’t hit 40 with mouths to feed and get to play dumb anymore. It’s time to put the doors back on the jeep, and buckle up.

It’s simple: Too many promises have been made that cannot all be financed. There is $300 trillion in paper wealth in the world, in part because of the illusion of it’s worth at today’s prices. Two thirds ($200 trillion) is debt (government, corporate, mortgage, student, auto, etc.). Our system pushes credit expansion as a mechanism for economic growth, regardless of project value. We never met a borrower we didn’t like. This debt is carried as assets on balance sheets of lenders and noteholders, whose equity (along with the same debt) is stuffed into 401ks, pensions, ETFs, and mutual funds.

You can basically follow it all back to some schlub named Chip in Poughkeepsie with a 596-credit score and a seven-year 120% loan-to-value on a 2015 Chevy Silverado. And Chip just walked out of Best Buy with a 60-inch Samsung, no money down.

It’s a house of cards, and the wind is stirring. That’s why I want real security, beyond a reliable paycheck. 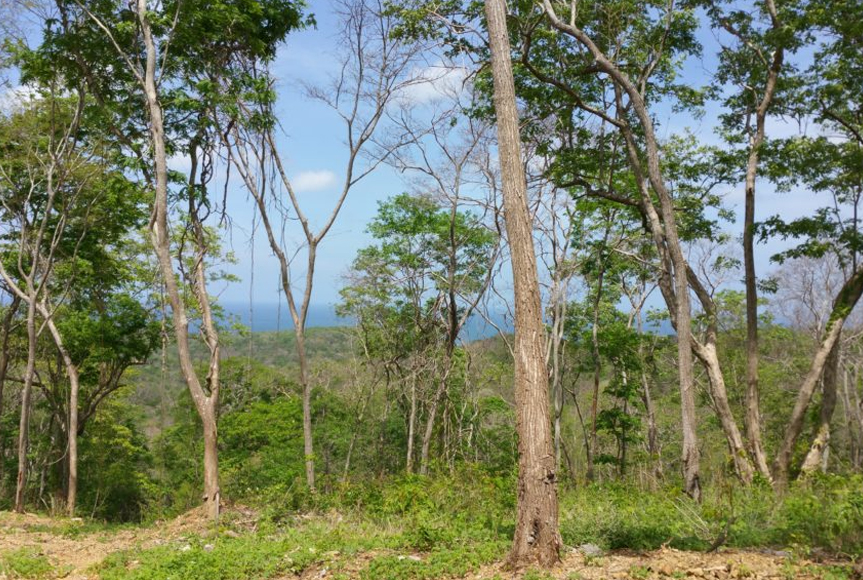 The quiet, Pacific breezes and the surfing (at Rancho Santana) cannot be beat. A former pawn in the global game of chess between Soviet and US super powers, the country is poor but on the upswing (I hope!), and the people are as warm as the weather.

If I’m like a burger, carefully patted and placed over the coals, then I’ve now puddled with juices, and just been flipped. It’s tough to acknowledge the first half over, but things are much clearer from this angle. I can see why it’s getting so hot and juicy.

I publish BadDaddy to share the things I’ve learned about the world, that I wish I picked up on earlier, bobbing around the Pacific (and getting formed into a patty).

I try to bring a unique perspective, two really. Mine and Ashley’s (the wife), like the yin and yang, delivering unconventional wisdom for free-thinking parents in America. The first thing we do is detach ourselves from the mindless pandering and finger-pointing of right versus left, striving for independent, second-level thinking.

At BadDaddy, we stand apart from the herd.

To the question, do we need a modern democrat or republican in charge, I am more inclined to try a cocker spaniel. But I don’t hate America. I love what America stood for, and want that dream back for my kids, your kids, and their kids.

Forty is the sweet spot – too old to miss the subtleties in what they’re selling, and too young to be stuck in a senior home writing complaint letters to the editor. It’s our time to take the helm from the delusional, cock-eyed baby boomers, and navigate a new path forward. So join me in a tumultuous, thrilling ride into the great abyss of human folly, with history as our guide, and a stiff cocktail for courage.

And Happy New Year, from the newly middle-aged. Here’s to a strong second half!

PS: Join our email list to get unique, fresh, actionable parenting and provider insights that dispel conventional claptrap. No ads, no spam, and no bull. Just straight-talk with a touch of humor for free-thinking parents, every 2-4 weeks, right to your InBox.