It’s not safe to trust the prevailing narrative.

We’ve been predicting the shitstorm now befalling America and the world for some time. For five years – accelerating in 2020 – we’ve warned of price inflation, debt deflation (crashing markets), supply chain disruptions, war, and government totalitarianism dressed up in a pink dress.

If this war cry isn’t Orwellian enough, you are now a boiled frog- 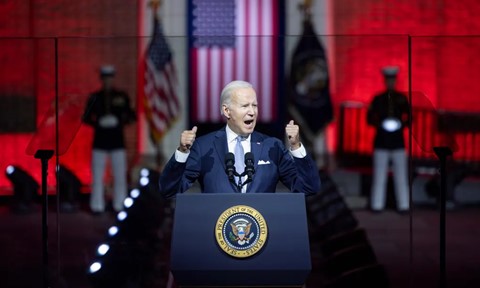 Welcome to hell, you rotten mealworms!

It is bizarre, living near the end of a 50-year global, credit-fueled bubble, a giant experiment in fiat money, stoked on greed, hubris, and corruption, now exacerbated by backwards energy policies.

Before you blame capitalism, this is fascism (corporations – Pfizer, Moderna, Amazon, Meta, and Blackrock – they’re in bed with government). The distortions – called malinvestment – are gargantuan.

Too many promises have been made that cannot be kept, and the pending losses – unfathomable in magnitude – can only be experienced as a massive reduction in living standards.

As Vladimir Putin just remarked, “The economy of imaginary wealth is being inevitably replaced by the economy of real and hard assets”.

We’re exiting the eye of the storm, the leading edge fought tooth-and-nail in 2008, a trailing edge postponed only by fueling its pending rage with more fraudulent, debt-based, money-from-nothing.

In summary, the jig is up, mealworms.

When it’s serious, they lie.

Was it Jean-Claude Juncker, President of the eurozone finance ministers, who said it back in 2011?

In a moment of truth, speaking candidly for all the madmen and stuffed shirts pulling strings in Washington and Brussels, Monsieur Juncker slipped, “When it becomes serious, you have to lie”.

Judging by all the lying, it’s now as serious as a funeral.

The money system, quite frankly, is collapsing. Not the one required by our Constitution, but the one born later (in 1971, in crisis), a rigged game of debt-based, fiat money; the one that spawned a unipolar world of American hegemony and inflated living standards fueled by global labor arbitrage.

It’s unraveling, dying now before our very eyes. With it will die those inflated living standards (except for a lucky and well-prepared few).

Those in power, to survive the collapse and seize the opportunity to shape the outcome, divvy up what’s left by putting the rest of us in chains, they need to lie. They know little else.

I’m not sure I even blame them. Many started wide-eyed, with good intentions, like Mr. Smith goes to Washington. The power of government – control over others – simply corrupts the human soul.

If they cannot find an adequate scapegoat, they face pitchforks. They’ll be burned at the stake or watch in the blink of an eye as their heads are severed in the town square by way of Guillotine.

In summary, they need boogiemen, and here they are-

I am not suggesting we did not have a novel coronavirus, that Russia did not invade Ukraine, or that the climate isn’t changing. I am saying that everything else around these is cooked up in a conference room over shrimp cocktail by busybodies whose aims are to (a) shift blame, and (b) centralize power.

When it gets serious, they have to lie.

1. The COVID hysteria: What more is there to say? I’ll try to be brief, but the key takeaway is that this was a giant, global, fascist, fraud-

Even the threat of monkeypox couldn’t save their precious pandemic.

But most of our friends, family, and neighbors went along with it, sadly hoodwinked. Perhaps 20-30% of us, “the remnant” as Dr. Chris Martenson calls us, didn’t tow the line.

I know firsthand friends and colleagues in media and medicine, newspaper journalists, TV reporters, clinicians, even researchers who appraise evidence-based literature. Most of them were (or still are) caught in the trap, not plotting wrongdoing, but sincerely trying to do the right thing.

They believed advocating for the vaccines was better than risking hesitancy.

Call it mass hysteria, groupthink, or manipulation. I won’t hold it against those who truly meant well. Welcome back among the truth seekers, friends. This is your one (and only) warning.

2. It’s hard to know what to believe on the Russian “war of aggression”. What we do know is that we’ve been meddling in Ukraine since at least 2013, and the sanctions have backfired.

The world is shifting into two camps, the USA, Western Europe, Ukraine, Canada, and Australia on one side, and nearly everyone else on the other. Humanity will be lucky if we can avoid WWIII.

Unless… if you are in power today, hoping to maintain it through the impending collapse of the money system with twin global energy and food shortages, WWIII is your Hail Mary pass.

That’s why I am distrustful of the prevailing narrative, the one parroted in unison by the peckers in government, media, and big tech, a fascist trinity of sociopathic bunglers.

In the meantime, we watch and wait while Europe will starve and freeze itself near death this winter without Russian natural gas, almost certain to be the spark of global contagion.

It’s not my intent to ‘bunk’ or ‘debunk’ this theory. I haven’t done the research, nor do I even care. I know only that no matter what’s happening with the climate, the solution is not the centralization of power.

Besides, the money system is the real problem.

Debt-based money requires endless growth (every dollar is created as a loan, payable with interest). If GDP isn’t growing enough to afford the interest, the system collapses, and that pain is too significant to worry about plastic in the ocean or climate. All efforts are directed at growth that requires consumption. More oil, copper, coal, cattle, corn, cars, concrete, plastic, rainforest, fish, and most of all, more debt.

Somewhere, a dove cries as we scrape the Earth for another 1,000 points on the DOW like an addict harvesting his pipe for resin, just one more fix before the sun comes up.

Listen, mealworms: The Earth will be fine – it has been for five billion years and will for five billion more. The species on it will do their best to adapt and survive, especially if we can decentralize power.

The biggest threat to Earth is not climate change, but power in the hands of government. It always has been, and always will be (until the sun blows up).

The certainty of it all – the groupthink, the mass hysteria, insisting we trust “the science” as settled, the marginalization of dissenters – it screams of COVID- and Russia-style manipulation.

Science is never settled; it’s the constant testing of hypotheses. What’s more alarming, though, as evidenced by COVID, is how easily it’s corrupted by the mechanism of funding.

Before you trust the science, start by following the money. Grants are awarded to researchers at universities who will support the prevailing narrative.

It doesn’t matter. We’re facing peak oil, so we’ll wean ourselves off hydrocarbons as production gradually declines and the price mechanism forces behavior change. But don’t believe it just because “everyone else” does. That’s a classic manipulation technique for herd animals (i.e. humans).

Even if it is true, who’s to say if not for global warming we might be entering another ice age, which would be orders of magnitude worse for the human species?

(For a different perspective on climate, this empirical piece by David Stockman is interesting, data-driven, pragmatic and compelling – I make no claims on which side is right).

No matter the scenario, I know only that humanity’s best course lies not in the consolidation of power in government, but instead in systems of individual liberty.

I note only that the drums beat loudly from the narrative machine, the same ones that roiled us up to fight unnecessary wars, lockdown in our homes, to wear masks, blame neighbors, and shiver in fear.

I will never trust those drums again. Their aim is to (a) shift blame, and (b) centralize power.

What they do with that power – build cricket farms, play God with the weather, and lock us in the Metaverse – it doesn’t matter. It’s doomed to failure. History shows centralized power brings three things-

As we’ve done (finally) with the COVID narrative, withdraw your consent. Refuse to have your opinions shaped by a broken, fraudulent, lying system of predators. Find information sources you can trust, get some gold, silver, and Bitcoin outside the system, and never, ever blindly trust authority again.

Want to raise empowered kids who see the code in the matrix, who know how the money system works, and how to use it? Kids who understand fiat, debt, the business cycle, Bitcoin, and the risk in groupthink?

Our line of Better Bedtime Stories does that. Join the Alliance and receive all of our books, three months apart, 40% off, in just the right order.