Researchers at the CDC report the birth rate in the USA just dropped to 1.73 births per mom, down from 3.77 in 1957. Babies (thus toddlers, tikes, preschoolers, and preteens), even in their best onesies and all that cooing and cuddling, have fallen in popularity by a whopping 53%.

The news isn’t all bad. Sure, no one loves wearing condoms, and “the pill” is chock full of hormones, but we’ll go ahead and confirm that which remains largely unsaid in the climate change debate-

The human race is pushing up on planetary resource limits.

Where this poses a real problem (insurmountable at that) is the government Ponzi-schemes known as Social Security and Medicare. Less babies today means fewer workers in the system to cover your senior living expenses tomorrow, so you can forget about those early-bird-specials at Tony Roma’s.

The Social Security Administration came out and said that just to keep the system functioning, they need a ratio of at least 2.8 workers for every senior rolling up to Tony Roma’s at 4:00 PM in the Coup de Ville, mooching benefits and stuffed to the gills with Dr. Scholl’s and prescription meds.

Maybe you can use this little nugget to get yourself laid tonight (“Baby, it’s for the good of the system, you know? The Social Security Administration needs us. They need us, baby.”).

When it drops below 2.8 – as it is doing now – the funding doesn’t work. Just like our broken, debt-based money system, this genius idea requires constant growth (on a finite planet).

It’s not going to get it.

Given labor participation, if each worker paying into the system expects benefits themselves, that seemingly harmless little ratio means we need a population of 1 billion people in the USA in just 150 years.

In four lifetimes, we have to cram 3.5 billion people in the home of the brave, all riding the gravy train, 18 million of them in Phoenix alone. That’s 1.3 billion pigs just to keep ribs on the menu (mmm, ribs).

Does this sound realistic? What idiot designed this system? Did they have math back then? Thank you, FDR. These traps were set 85 years ago, and now we’re f—ed.

No sense freaking out Greta Thunberg any further with these projections, as we’re already below the Mendoza line. The system of endless growth is broken, and headed for collapse.

My college physics professor (Al Bartlett) was famous for noting the biggest shortcoming of the human race is the failure to comprehend the exponential function. They all turn up, just like hockey sticks. 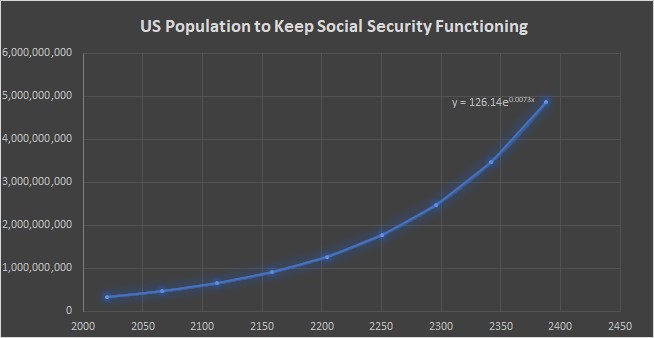 Charles Ponzi is cracking a cold one right now as he looks down (up?) at that chart. The system is doomed, there’s no getting around it.

Although… there is one idea. One little thing that solves everything. It makes the math work on all of these exponential problems we’re facing. The strategy?

If it works, it steals just enough purchasing power from everyone holding dollars to paper over the problems, enriching a tiny few who understand it. The dollars grow, and the benefits shrink.

The only other problem is… if it’s not carefully balanced just so, right on the head of a tiny pin, it ends in a total collapse of the currency system.

The clowns in charge are certain to keep fiddling until it does.

Want more like this? Try The Truth About Babies.

Hat tip to Sovereign Man for the head’s up on this column idea.